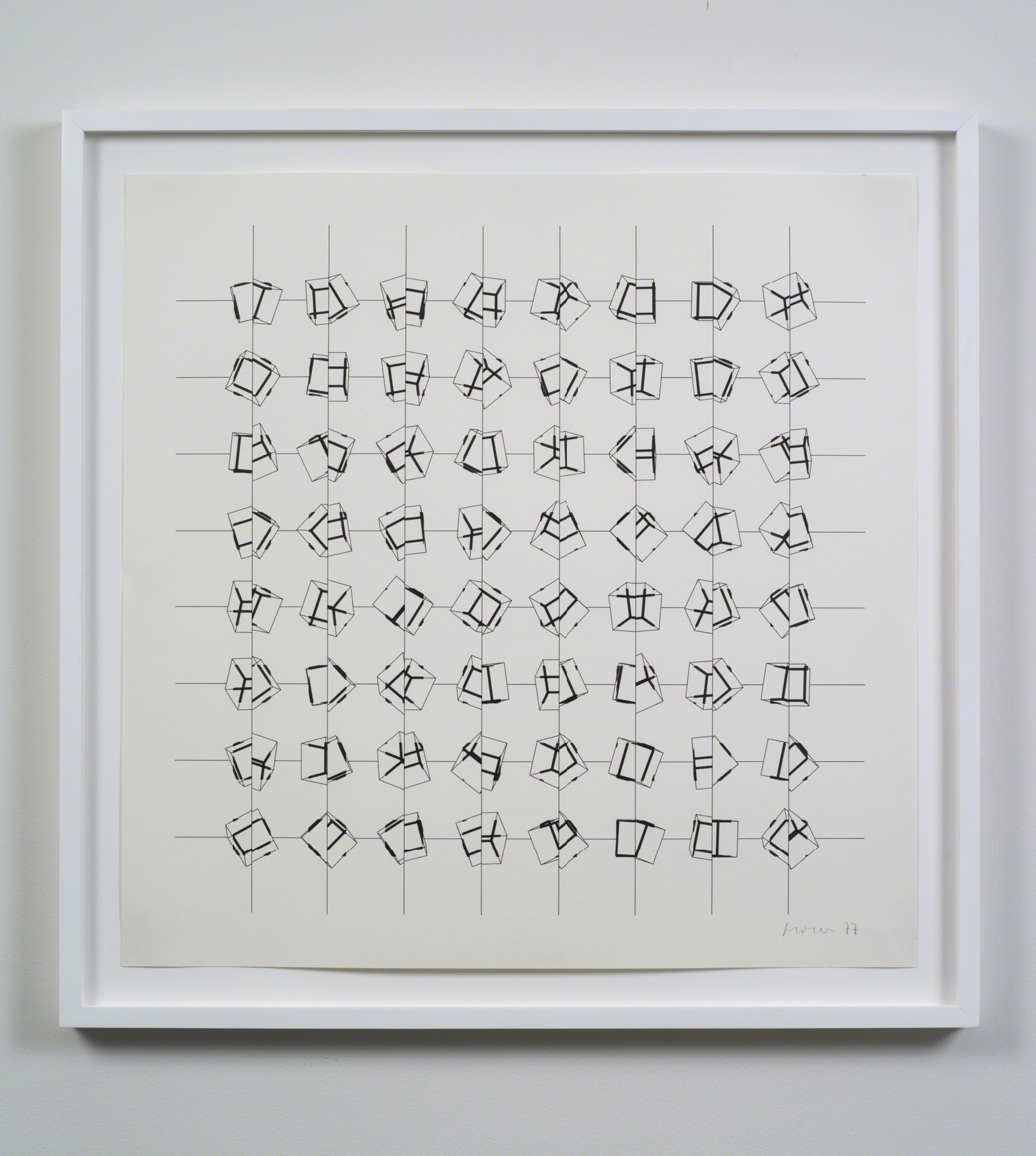 Manfred Mohr is considered a pioneer of digital art based on algorithms. After discovering Prof. Max Bense’s information aesthetics in the early 1960’s, Mohr’s artistic thinking was radically changed. Within a few years, his art transformed from abstract expressionism to computer generated algorithmic geometry. Further encouraged by discussions with the computer music composer Pierre Barbaud whom he met in 1967, Mohr programmed his first computer drawings in 1969. Since then all his artwork is produced exclusively with the computer. Mohr develops and writes algorithms for his visual ideas. Since 1973, he generates 2-D semiotic graphic constructs using multidimensional hypercubes.
In the second part of this work phase (1976-77), cubes are divided into two parts by one of the Cartesian planes. For each image the two partitions contain independent rotations of a cube. They are projected into two dimensions and clipped by a square window (the projection of a cube at 0,0,0 degrees). By rotating both parts of these cubes in small but different increments, long sequences of images are developed.
Exhibition catalog: Manfred Mohr, “Dessins Génératifs – Cubic Limit II”, Galerie Weiller, Paris, 1977 (catalog and shows)
Also:
Manfred Mohr, “Generative Bilder und Zeichnungen 1977-78”, Galerie Teufel, Cologne (catalog and show) P-112, lady quark, 1972 Computer generated pen plotter drawing, ink on paper Random points chosen within a circular area of each square are linearly transformed to each of square’s 4 sides and densely to its center point. Details: http://emohr.com/sc69-73/vfile_112.html A work from this algorithm was one of my art pieces in the historic group show: […] 4 artworks of which 2 are printed and 2 are drawn on folding and sprocketed computer printer paper. First shown Paris, 1976, then Hamburg 1976 — Visual Transformations of texts and images – 1976 First shown in group show {photo left): Contrastes, Centre Culturel de Marais, Paris 1976 My contribution to the show was 4 […]